Alright people, I gave you the run down in last week’s post, and now we’re doing a deep dive. Time to tell you all about Yarn Con!

First of all, I had a fantastic trip to Chicago with Taylor. If you’d like to read about the non-yarny details of the trip, I recommend that you check out my last post.

For those of you that only care about the Con, you’re in the right place.

We’ll start with crowd levels – they weren’t as bad as I expected.

As you can see from these pictures I took from the lovely balcony that overlooks the venue (I love this feature of the building, it’s so fun to get this bird’s eye view of all the vendors!), it really wasn’t that bustling.

Perhaps we got to the event at a less busy time than last year, or maybe it really wasn’t as bustling as the year before, or maybe (and I find this quite likely), I misremembered how tightly packed the Con was last year.

No matter which of these options, the point is that I was not in fact bumping into my fellow yarn-fanatics at every turn. Occasionally I’d have to wait patiently for a booth to empty so that I could check out the wares, or have to politely push my way through a gaggle of knitters who’d converged on a display while I was in the booth and blocked me in. But overall, it wasn’t that difficult to get around.

There were a lot of the same vendors there from last year – Bumblebee Acres, Yarn Geek, and Apothefaery were just a few that stood out in my mind as repeats, though I’m certain there were others hat had been there the year before as well.

I ended up buying yarn and notions almost exclusively from vendors I’d never purchased from before. Northern Bee Studio was the only company from which I’d previously bought something, and even that was a different base.

Which is a great segue into the heart of this post – my Yarn Con haul!

Before I get to the yarn, I have to first show of these gorgeous buttons that I bought from Bunny Badger Fiber. 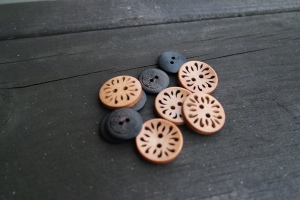 They were definitely the button queens of this fiber festival – they had a table with several different displays containing a huge selection of the most adorable buttons you’ve ever seen.

These cut out wooden ones I’ve purchased for a cardigan I’ve been planning to make for over a year. I think they’ll compliment the forest greens and browns of the intended yarn.

These were more of an impulse purchase. I do have an idea for a cardigan I think I’ll want to use them for, but mostly I just fell totally in love with them. Aren’t they gorgeous?

I also purchased this progress keeper. Progress keepers were something I was specifically looking for at this festival, since I haven’t owned any until now. This was the only one that caught my eye at the Con, though, so I’ll be on the lookout for more in the future.

Now, let’s get into the yarn.

This is their worsted weight, 100% Merino base, in the colorway Juvenile Bald Eagle. 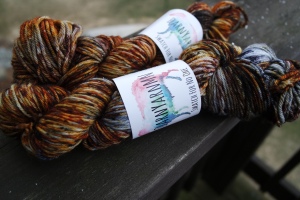 With worsted weight in mind, here was my other worsted purchase from the Con! These lovely skeins are actually somewhat outside my usual preferred color scheme. The speckled browns and orange is definitely not something I’d typically pick up, but for some reason I was drawn to this. I couldn’t get it out of my head for the whole day, so I knew I had to have it.

The company is Darn Yarn MN, and this is their 100% Merino base in the colorway By the Wing.

I just have to make a side note to point out that their slogan is “Swatch For No One,” which I simply adore, and also live by. 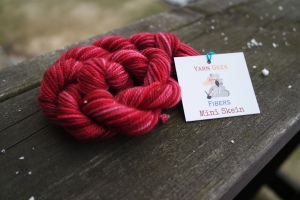 This mini-skein is a purchase from Yarn Geek in their Super-Geek! base, which is 75% Corriedale, 25% Nylon. This will someday be the heel, toe, and cuff of a pair of socks.

Now, a note on the colorway, which is called Emilie du Chatelet. One of the things that I absolutely love about this company is that they name many of their colors after famous women from STEM fields. Emilie du Chatelet was a famous mathematician, and I never would have heard of her if not for this yarn.

Finally, this yarn I purchased from The Grinning Gargoyle.

I was looking for a thin sock weight yarn for a pair of socks I’m going to make myself (hopefully the thinner yarn and subsequently smaller stitches will help cure my dislike of hand-knit socks). When we saw this colorway in particular, Taylor pointed to it and said, “This coloway is so you.” Which I had to agree with. It’s called Signature Res.

What sealed the deal, though, was the fiber content. This is their Khalessi Sock base, which is a 70/20/10 combo of Merino, Yak, and Nylon. I’ve never worked with Yak wool before, and I’m very excited about that.

Well! That just about wraps it up. Hope you enjoyed this little yarn haul. Let me know in the comments what you’re favorite purchase was, or if you went to Yarn Con yourself!